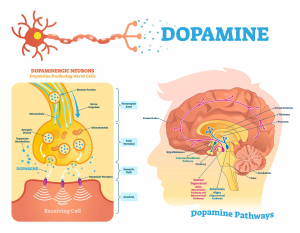 Dopamine is a neurotransmitter that helps control the brain’s reward and pleasure centers. When released by a neuron at a synapse, it causes an increase in the effect of the neurotransmitters on that particular neuron. It may be released when a person engages in any type of activity, such as eating or having sex, which causes them to feel some kind of reward.

This is a neurotransmitter that is associated with pleasure, movement, and attention. It is produced in the brainstem and is released by neurons in the substantia nigra pars compacta. The dopamine pathways originate in the ventral tegmental area and terminate in the nucleus accumbens. The body uses this neurotransmitter in three ways:

People who use cocaine often report feelings of pleasure initially; however, repeated use can actually cause long-term depression of dopamine levels. This leads to cognitive problems, emotional instability, and drug cravings that are not easily managed without help.

What Does Dopamine Do? 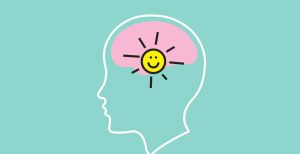 It is also important for sleep regulation through its role as a precursor molecule for norepinephrine. Therefore, low dopamine levels may cause problems falling asleep or staying asleep throughout the night.

Caffeine increases arousal by blocking adenosine receptors and stimulating dopamine receptors ( Schmitt, 2006 ). The release of dopamine makes you feel more attentive and may make it easier to stay awake.

Dopamine is a neurotransmitter that is responsible for transmitting signals between the brain cells. It helps in the regulation of movement, emotional response, and the experience of pleasure. Dopamine is also responsible for the motivation to seek out rewards. It is a key element in the brain’s reward and pleasure chemical messenger system.

Dopamine is a vital part of a person’s life because it helps in motor control, motivation, arousal, cognition, and the feeling of joy. It does not have any negative effects when it’s at proper levels. However when the levels are too low then it leads to depression, lack of pleasure from activities that were normally pleasurable before dopamine deficiency occurred.

It also leads to impulsivity, hyperactivity and may lead to obsessive behavior which can be dangerous if not controlled with medication or other forms of treatment. 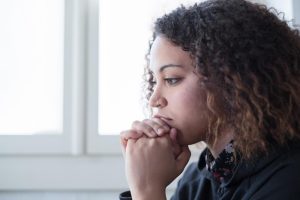 Dopamine deficiency can be caused by diseases or it can also be caused by certain medicines. It may also be caused by any other substances that interfere with dopamine levels like illegal drugs and painkillers. When too much cortisol is released to the body this affects the neurons connected to dopamine production. This leads to a decrease in dopamine levels which causes depression and anxiety among other symptoms that affect daily life. Some factors that contribute to this disease are:

If there is a dopamine deficiency, it will have an impact on the way you feel, think, and act. People may experience some or all of these symptoms: lack of energy low sex drive being easily irritated depression compulsions gambling addiction decreased motivation loss of interest in hobbies

How Does Dopamine Impact The Brain? 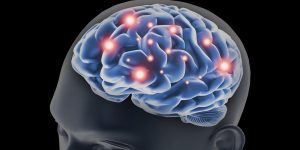 Dopamine is responsible for transmitting signals between the brain cells. It helps in the regulation of movement, emotional response, and the experience of pleasure. It is also responsible for the motivation to seek out rewards. Because it is a key element in the brain’s reward and pleasure chemical messenger system.

Dopamine is a vital part of a person’s life because it helps in motor control, motivation, arousal, cognition, and the feeling of joy. It does not have any negative effects when it’s at proper levels. However when the levels are too low then it leads to depression, lack of pleasure from activities that were normally pleasurable before dopamine deficiency occurred.

It also leads to impulsivity, hyperactivity and may lead to obsessive behavior which can be dangerous if not controlled with medication or other forms of treatment.

What Are Some Activities That Release Dopamine?

There are many activities that release dopamine, including but not limited to: sex, exercise, eating, drinking, and socializing.

When you do something that you enjoy and that makes you feel good, your dopamine levels increase. This can provide a sense of pleasure and happiness, and it can also motivate you to continue engaging in those activities.

Whether or not caffeine increases the potency of some medications is unknown because there are no studies available on this topic. However, many people believe that caffeine can increase the effects of stimulants such as Adderall due to anecdotal evidence from their personal experiences with these drugs. It is best to consult your doctor before taking any medications with caffeinated drinks to avoid potential complications.

Can You Increase Dopamine Levels In Your Brain? 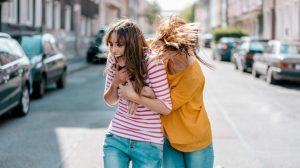 Dopamine is a neurotransmitter that is associated with pleasure, movement, and attention. It is also responsible for the brain’s ability to learn and remember. There are a few things that you can do to increase dopamine levels in your brain:

Get enough sleep. Lack of sleep can lower dopamine levels.

Meditate. Meditation can help to boost dopamine levels in the brain.

Take supplements that boost dopamine. There are many supplements that you can take that will increase your dopamine levels, including multivitamins and amino acid supplements. These are safe for most people, but if you have any preexisting health conditions or concerns about taking these types of supplements it is important to talk with your doctor first to determine if they are right for you.

Drugs like marijuana, alcohol, heroin, cocaine, methamphetamine, MDMA (ecstasy), nicotine, and caffeine all lower dopamine levels by preventing nerve cells from reabsorbing the excess amounts of neurotransmitters after its release into the synaptic gap between neurons; this interferes with your normal communication between neurons and reduces the amount of dopamine in your system. This causes you to feel less pleasure than you normally would.

Researchers at Concordia University found that people who exercised for 20 minutes on a stationary bicycle experienced an increase in dopamine levels in the brain immediately after exercising, as well as up to two hours afterward when they were resting. They also tested mice who ran on an exercise wheel for five days straight and found that these animals had higher dopamine levels than mice who did not run even though both groups ate food with the same number of calories. Exercise releases endorphins which are chemicals naturally created by the body during physical activity that work similarly to drugs like opium or morphine but without all of their negative side effects. 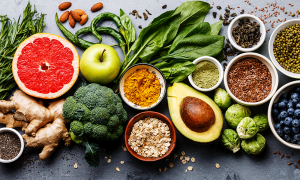 Foods that are high in protein and complex carbohydrates do not increase dopamine levels but they help to boost serotonin which is a neurotransmitter that causes happiness and feelings of well-being, complicates sleep and appetite control, elevates your mood, reduces anxiety, and regulates the release of other neurotransmitters including dopamine. Eating right can improve symptoms of depression and low self-esteem by raising serotonin levels in the brain.

“Coffee,” specifically caffeinated coffee (and caffeine in general), seems to be associated with increased dopamine activity; though there isn’t conclusive evidence that coffee increases dopamine or vice versa it is believed that the caffeine in coffee triggers certain neurons to release some dopamine (Mangos).

“Some research has been done to support the view that the proteins found in foods such as green leafy vegetables, animal products, and whole grains may increase dopamine levels” (Mangos).

Exposure to bright light during the day can help to preserve dopamine levels in your system, while darkness at night increases melatonin production which causes a drop in dopamine. Some hypothesis also says that this is one of the factors that cause seasonal affective disorder since lack of sunlight causes depression. In fact, studies have shown that exposing patients with major depressive disorders to 30 minutes of bright morning light for two weeks straight was enough to significantly reduce their symptoms of depression (Oren).

Certain medications like Adderall and Concerta are often a presciption for ADHD. Because they increase dopamine levels, which can produce a calming effect in people who need it. As many as 70% of children with ADHD also have problems with anxiety; stimulants like Ritalin and Dexedrine work by increasing dopamine activity which gives the brain enough stimulation to focus on one task at hand without becoming distracted or overwhelmed. These drugs actually inhibit the reuptake of dopamine (which means that more is present in the body) instead of directly increasing its production, though tyrosine supplementation may also provide some relief from symptoms of ADHD (Petrosino).

There are a number of benefits to having increased dopamine levels in your system. Dopamine is associated with feelings of pleasure and reward. So high levels can lead to a greater sense of happiness and well-being. It can also increase motivation and productivity and can help you to feel more alert and awake. Additionally, dopamine performs the regulation of other neurotransmitters including serotonin and norepinephrine. So increased dopamine levels can have a positive impact on your mood and overall mental health. 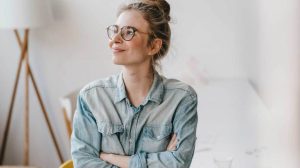 There are a number of things you can do to help maintain healthy dopamine levels in your brain. Some of the most important include getting regular exercise, eating a balanced diet, getting enough sleep, and avoiding drugs and alcohol.

In addition, you can also try some of the following tips:

1. Get regular exercise. Exercise releases dopamine and other feel-good chemicals in the brain, and it has been an effective way to treat depression and anxiety.

2. Eat a balanced diet. Eating nutritious foods helps to ensure that your brain has the nutrients it needs to produce dopamine. Some foods that are high in dopamine-boosting nutrients include green leafy vegetables, animal products, whole grains, and nuts.

3. Get enough sleep. Not getting enough sleep can make it harder for your brain to produce dopamine and other feel-good chemicals, which means you’ll be more susceptible to depression and anxiety.

4. Avoid drugs and alcohol. Drugs and alcohol prevent the production of dopamine in your system and also interfere with its release so they can actually worsen symptoms of depression or anxiety rather than improve them.

If you are experiencing symptoms of low dopamine levels, talk to your doctor about treatment options that may help increase the levels naturally. You may wish to ask if any supplements could help treat your condition. Since some have a positive effect on mental health conditions that links with low dopamine levels. However, note that you should not take some supplements with any medications you are currently taking. So it’s a good idea to check with your doctor before trying anything new. 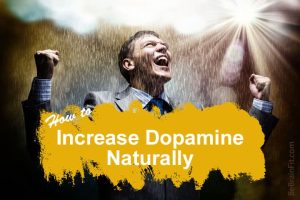 Yes! A few things are beneficial to increase dopamine levels in the brain and promote mental health as a whole:

Dopamine is a neurotransmitter that can be present in the brain. It is responsible for feelings of pleasure and motivation, as well as addiction to drugs or other substances. Dopaminergic activity also regulates moods, sleep patterns, sexual desire, focus levels, stress response systems, and more. This chemical has been studied extensively by neuroscientists because it offers insight into how the human brain works on an emotional level. If you are looking for ways to increase its production naturally with no drugs involved then you should consider engaging in activities like long walks outside your home where you have nothing but time alone with yourself. Reach out to us for further information.