There are a lot of misconceptions about obsessive-compulsive disorder . Some people think that OCD is just a quirk or personality trait, while others believe that it is just a phase that someone will grow out of. The truth is that it is a serious mental illness that can cause a great deal of suffering for those who have it. In this blog post, we will discuss some of the most common misconceptions about OCD and set the record straight. 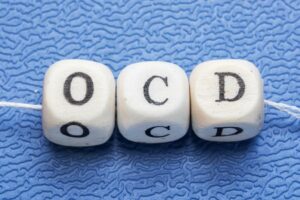 Obsessive-compulsive disorder is a mental illness that is characterized by two main types of symptoms: obsessions and compulsions. Obsessions are intrusive and unwanted thoughts, images, or urges that cause a great deal of anxiety or distress. Compulsions are repetitive behaviors or mental acts that someone with OCD performs in an attempt to relieve the anxiety caused by their obsessions.

OCD is a psychological disorder that usually begins in adolescence or young adulthood, but it can also start in childhood or later in life. The disorder is relatively common, affecting approximately two percent of the population. Although there is no single cause of OCD, it is thought to be the result of a combination of genetic and environmental factors. It can also happen as a result of stress, trauma, certain physiological conditions, or other psychiatric disorders.

DSM-5, a popular acronym for the Diagnostic and Statistical Manual of Mental Disorders, Fifth Edition, is the most credible and widely used reference guide for the diagnosis of psychiatric disorders. It recognizes OCD as a distinct mental disorder and provides specific criteria that must be met in order for someone to be diagnosed with the condition.

What OCD Is Not? 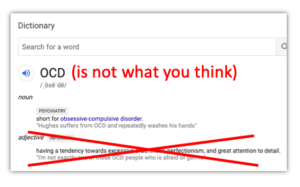 OCD is just a harmless quirk

One of the most common misconceptions about OCD is that it is just a quirk or personality trait. We often people associate OCD with daily-life behaviors such as being neat and tidy, liking things to be in order, or double-checking the locks on the doors. While it is true that people with OCD may perform these behaviors, they do so because they are driven by intense anxiety and fear. For people with OCD, these behaviors are not simply preferences or choices; they are compulsions that can prove to be extremely debilitating. It is also worth noting that not all people with OCD are neat and tidy. In fact, some people with OCD may be messy and disorganized because their compulsions are focused on avoiding contamination.

OCD equates to being a perfectionist

While people with OCD may be perfectionists, this is not what the disorder is. People with OCD have intrusive and distressing thoughts that they cannot control, no matter how much they try.

The need for perfectionism may stem from the fact that people with OCD often have very high standards for themselves. This can lead to a great deal of frustration and disappointment when they are unable to meet their own expectations.

OCD is just a phase

Another common misconception about OCD is that it is just a phase that someone will grow out of. This is not the case. OCD is a chronic and long-lasting mental illness that can have a profound effect on someone’s life.

OCD is only about cleaning and orderliness Whenever we say OCD, the very first image we get in our heads is of a person who is extremely clean and orderly. While it is true that some people with this condition may have compulsions related to cleaning and orderliness, this is not the only subtype. There are many other types of obsessions and compulsions that can be just as debilitating.

Even the people who have urges to be tidy and orderly is not something they enjoy. The very prominent and distressing thoughts make it hard for them to focus on anything else.

When we think of a person with OCD, we mostly imagine them as being extremely clean, well-dressed, and put together. However, looks can be deceiving. People with OCD come from all walks of life and can have any appearance.

Just because someone is neat and tidy does not mean they have OCD. Likewise, just because someone is disheveled and messy does not mean they don’t have this condition. Most of the thoughts, behaviors, impulses, and obsessions are covert in nature. This means that they are not always visible to the outside world. For example, someone may have compulsions to wash their hands for hours at a time, but they may do this in the privacy of their own home where no one can see them. Similarly, if someone is having intrusive thoughts about harming others, they are not going to act on these thoughts in public.

Although OCD is a relatively common mental disorder, it is often misunderstood and underestimated. This can lead people to believe that OCD is rare. In reality, OCD affects approximately two percent of the population.

This means that if you know 100 people, chances are that two of them will have OCD. It is important to remember that OCD can happen to anyone, regardless of age, race, or gender.

OCD is not curable

Although there is no cure for OCD, it is a treatable condition. With the right treatment, most people with OCD can live normal and productive lives. The key to successful treatment is early intervention. The sooner someone begins treatment, the better their chances are of recovery. While treatment may not “fix” the disorder, it can make life more manageable. People gain a variety of coping mechanisms, a better understanding of themselves, and an array of resources to lean to. All of these help in building a more fulfilling life.

OCD is something one can “snap out of”

While this is something most people wish they could do, but it is not that easy. As mentioned before, OCD is a chronic and long-lasting mental illness. This means that it will not go away on its own and will require treatment.

Trying to “snap out of” OCD can actually make the symptoms worse. This is because people who try to do this often end up feeling like failures when they are unable to control their thoughts and behaviors. This can lead to a decrease in self-esteem and may push an individual to engage in more compulsive behaviors.

People with OCD are “crazy” or “psychopaths” We often use terms like insane, crazy, or psychopath to describe someone with a disorder. This is not only inaccurate but also offensive. These terms delegitimize the very real and often debilitating disorders. It also makes a sufferer seem like an outcast. This also keeps people from seeking the help they need because of the fear of being labeled. Consequently, one may end up feeling even more alone and hopeless.

We often use the words “obsessed” as a casual way to describe someone who is really into something. For example, you might say you are “obsessed” with a new TV show or “addicted”. This can often be confused with OCD.

While someone with OCD may be fixated on a certain thing, it is not the same as an impulse control disorder. An obsession is defined as a persistent, unwanted thought, image, or urge that intrudes into a person’s consciousness. A compulsion is defined as repetitive behavior that a person feels driven to perform in order to relieve anxiety or distress.

Impulse control disorders are characterized by the inability to resist an urge, despite the potential for harm. This could be something like gambling, spending, eating, or sex. However, with the disorder, there is no pleasure associated with the behaviors. Rather, they are a source of extreme anxiety and distress.

These are some of the things, qualities and actions of what OCD is NOT. It is important to be aware and careful of the words we use to describe others as well as the way we think about mental disorders. The language we use can have a profound effect on how OCD and mental illnesses, in general, are perceived.

Now that we know about what OCD is not, we will understand the root cause of why these rather problematic misconceptions exist. 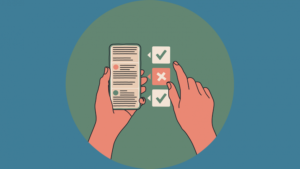 While we might not be able to change the way the media portrays mental illness, we can change the way we think about it. It is important to be mindful of these misconceptions and to educate yourself and others about what OCD is not. Only then can we begin to destigmatize mental illness and provide the support that people deserve in order to heal and recover.

After learning what OCD is not, we will now understand the prominent and tell-all signs that differentiate between regular traits and potential symptoms.

All of these are different from day-to-day qualities such as being neat or preferring things to be a certain way. It also differs from people having favorites, as people with OCD do not simply prefer one thing over another. It is important to be mindful of observing the degree of symptoms even in ourselves or others around us.

In conclusion, OCD is a highly complex and widely misunderstood mental illness. It is often portrayed inaccurately in the media, and there is a lot of misinformation about the disorder. This can make it difficult to seek help and get the support that you need. It is important to be mindful of the misconceptions about OCD and to educate yourself. It is very important to know the difference in what the symptoms are and what it is not.

OCD is a serious mental illness that can have a profound effect on someone’s life. If you or someone you is struggling, know that there is help available. With treatment, most people can manage their symptoms and lead happy and fulfilling lives. At Therapy Mantra, we have a team of experienced mental health professionals who can help you learn how to manage your symptoms. Our services are available from all across the globe at affordable rates. Contact us today to book a session or download our free Android or iOS app for more information.